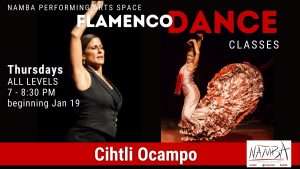 Flamenco ALL LEVELS with Cihtli Ocampo

TECHNIQUE AND CHOREOGRAPHY (IN PERSON)

This class is designed to give students a strong technical background and take them to the next level in their Flamenco routine. The class starts with a rigorous footwork, arm and upper body warm up followed by marking to various palos (Flamenco styles). The second half of class is dedicated to working on small sections of choreography in different palos exposing the student to multiple styles and rhythms within Flamenco. This class is open to all levels and is designed for dancers looking to solidify their foundation, expand their knowledge and improve their technique, stamina, style, rhythmic understanding, melodic sensitivity, turns, improvisational abilities and corporal versatility.  Email Cihtli with any questions or concerns at cocampodance@gmail.com

Described as a “…powerful dancer” by Dancemagazine, Cihtli Ocampo began her dance studies at the age of eight and moved to NYC at seventeen to study Dunham, Horton, jazz, tap, modern and ballet at the Ailey School and Steps On Broadway. In 1999, she moved to Spain on a Fulbright Scholarship for the study of Flamenco and Spanish Dance. She spent the next eleven years immersed in Gitano (Spanish Roma) culture where she trained primarily with the legendary Farruco Family as well as Concha Vargas, Carmen Ledesma, Manuela Carrazco, Belen Maya, Eva La Yerbabuena and Yolanda Heredia. She has performed and toured with many of the world’s most important flamenco artists including the Farruco family, Ines Bacan, Montse Cortes, Miguel Funi, Chano Dominguez,and Manuel Molina. In 2004 Ms. Ocampo was the featured female dancer in Tony Gatlif’s film Exils (Best Director, Cannes Film Festival 2004). In 2006 Ms. Ocampo became a founding member of her husband Ethan Margolis’ Arte y Pureza Flamenco Company, an international Flamenco company dedicated to diffusing pure, roots Flamenco Gitano worldwide.

Ms. Ocampo now lives in Los Angeles where she continues her life-long commitment to cross-cultural understanding through the arts. In addition to performing, Ms. Ocampo works as a guest choreographer, teacher and movement coach for UCSB, Cal Arts, UCSD, Pomona College, Santa Monica College and independent studios and productions worldwide. She has choreographed over 30 original works for stage and film and taught thousands of students; teaching flamenco rooted in an understanding of its rhythm, song, improvisation and history. She has starred or been featured in countless productions including Maestria (2007), Spanish Day (2009) Quien Yo Soy (2013), Tsigan (2014) Sonikete Blues (2016) and Woodshedding (2019)  Her latest project, Our Ephemeral Nature, is a short film produced by Ms. Ocampo in which she performs an original work exploring the ephemerality of life, art, nature and performance through an investigation of internal rhythms and improvised reactions to an ever-changing environment. Over the last ten years Ms. Ocampo has  returned to Tap, Modern and Jazz, creating a new aesthetic that is unique to her experience and her body. While in LA she has collaborated with some of the country’s top jazz singers and musicians including Katisse Buckingham, Deron Johnson, Reggie Hamilton, Emi Seacrest and Maya Sykes. She has a BA in Political Science from NYU and an MFA in Dance from Hollins University.